Jack started fishing at the early age of one. The first 16 summers of his life were spent fishing at Neah Bay, with his parents and grandparents as “Kelpers” – catching and selling salmon caught in the Straits of Juan de Fuca and the Pacific Ocean. Prior to the families years at Neah Bay, Jack’s grandfather owned a very well known fishing resort on Camano Island called ‘Camp Lagoon’, where he hosted thousands of people on fishing excursions.

After high school Jack went on to college at Washington State University and was on the 7 year plan for his BA in Sport and Recreation Management. While at college he fished, hunted and played a large amount of Rugby, hence the 7 year plan. Soon after graduation he found himself in Ellensburg and realized that his love of fishing had brought him to the right place.

His fishing trails have led him to Alaska, Canada, Idaho, Montana, Wyoming, Washington, Oregon and South America. In Chile, he explored many watersheds  and guided in South America for a total of 7 winters. The Evening Hatch started as a small dream in 1988 and since the company has grown from a small red pick-up, an Achilles raft and doing a seasonal 30 trips a year, to a year round operation. Our services range from day trips to all inclusive programs featuring our  post and beam overnight programs in three locations and our ‘Heart and Soul’ waters include the Yakima, Klickitat, Upper Columbia and Olympic Peninsula. Jack started the credited fly fishing class at CWU in 1994. The class is still ongoing and very popular. He has spoke on the topic of fly fishing at sport shows, clubs and seminars.

Jack, The Evening Hatch and his guide staff have been featured in numerous publications over the years including …

The company goal is and always has been to have fun on the water, provide you with an enjoyable fishing experience, teach you some new technique, and create appreciation for the wonderful resource; We thank you for your continued support. 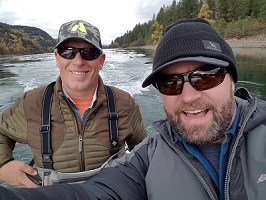 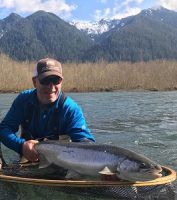 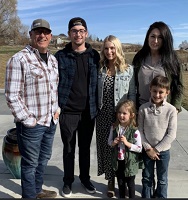