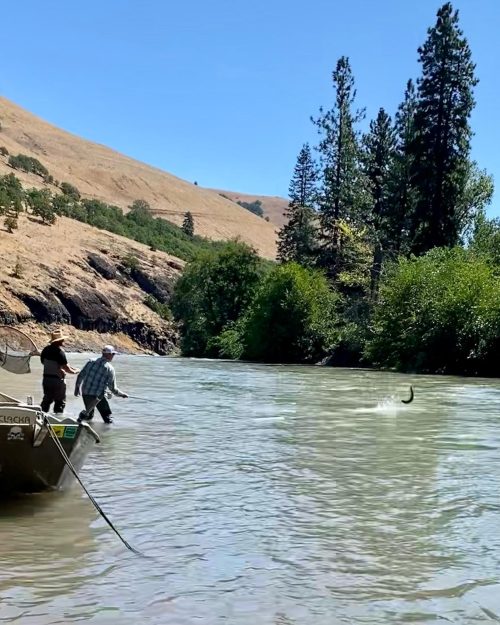 Three general ways a steelhead will “take” your fly.  This is a generalization.

First, the Kamakazie – is just that. This fish, at some point during the swing, just absolutely smashes the fly, leaving you no time at all whatsoever to react and it is AWESOME! It just completely rocks your world and it’s what we live for right!?! The tug is the drug as they say. I would say that this type of take happens about 30% of the time but is unequivocally addicting, when it does.

Second, the Pluck – the pluck is really a tap/grab/jab of the fly,  if you will. Some liken it to a “trout take”. It’s not a knock your socks off kind of take at all yet it is generally  identifiable.  I would say 40-50% of the time, my takes are of this variety.

Third, the Long Slow Pull – almost feels like you’re fly has hit bottom, especially when you feel the pull on the hang down.

Setting the hook – The most important thing to remember is that no matter how the fish decides to eat your fly, you must let them!  This especially pertains to the Pluck and the Long Slow Pull.  On the aforementioned two types of takes it is important to wait until you feel the weight of the fish before you set the hook.    For example, often times you will feel a formidable Pluck, but not weight.  In this scenario if you set the hook often times you will blow your chance on the fish.  However if you wait and the fish is committed, you will shortly be reward by far more than just a pull or pluck.  It is at this point that you should actually set the hook, which really is nothing more than a semi abrupt short range of motion of the rod tip toward the bank and generally a lower angle.

Suggestions on how to ‘give the fish the fly’

1. One of the more popularly used methods would be to “carry a loop.” Not too much of a loop, but say around 8 inches or so. So in essence, when the fish eats your fly, just drop your loop. In other words, you just give it to them. Then, after they are peeling line off the reel, you can give your rod a stout tug to further lodge the hook in and make sure it is “set”.

2. The second way to “give it to them” and let the fish hook themselves is to fish with a very loose drag and no loop. That way, when the fish takes your fly, there is virtually no resistance thereby hooking themselves. Once the fish starts to peel line off your reel, again, you can give your rod a stout tug to further lodge the hook in and make sure it is “set”. Also, I would recommend tightening up your drag is a good idea too so you can keep the fish on the ‘reel’ through the fight.

3. The third way to let the fish hook themselves would be to keep your rod tip up in the air so that when the fish takes your fly, you can drop the rod tip to the water, thereby giving the fly to the fish and hence hooking themselves. Of the 3 methods, I would say that this is the least commonly used one but it does work.

As with anything, this is just a basic outline. Hopefully a guideline that will help!