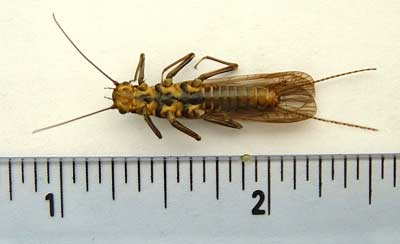 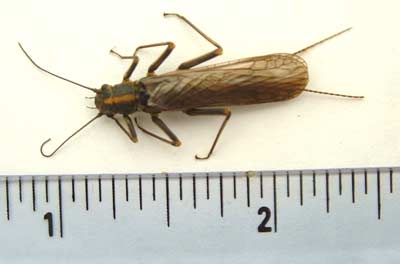 Skwala – Fact or Fiction?
Some would say they don’t exist, others say they are prolific. Neither is true. Then what is their importance? Why the big talk of the Skwala? There are definitely Skwala stoneflies. Often, when fishing, you will not see many on the water.  Trust your guide when I say, ‘The trout know they are there’.

The Skwala Stone is a typical stonefly in that it prefers faster oxygenated water. As with most stoneflies the life cycle is two to three years and it survives as a predator by eating other aquatic insects. They are an important food source for trout for many reasons:

1) As active nymphs they are often found in the water/food column for the trout, being knocked loose and free drifting. This is especially true during pre-hatch periods when their movement activity increases dramatically.
2) They are also available to the trout as the female adult returns to the water to lay eggs.
3) On a windy day as the male or female adult is blown on to the water, and;
4) As a spent adult that falls on the water to die.

The Skwala nymph becomes fairly active at around 38-40 degrees and the adults will generally hatch anywhere from the 42-47 degree mark. The nymph generally emerges in the late afternoon and into the evening.

Skwala – A Personal Testimonial
In 30 years of fishing the Yakima River, March 15th, 1989, will go down in my journal as the best dry adult Skwala day I have ever seen. I was fishing with another guide, one of the Yakima’s originals and  outdoor author and photographer.  While we only saw  +/- 200 adults, the fishing was automatic with trout slashing Skwala’s on the surface at will …. for 6 hours. It’s a day I will never forget and if I quoted numbers you would call BS.

It’s true that I have seen over the years almost comparable hatches and activity as in 89′. One of the Evening Hatch’s guide staff, Keith Wersland, who by the way is the longest lasting guide on the river to date, and I have given names to quite a few specific runs on the river after day’s of fishing Skwalas. “The Wersland Big Dog Stone”  is a pattern that was developed by Keith specifically for the Skwala hatch.

The Skwala activity is strong beginning mid February and generally lasting until mid April. Certain years don’t offer as good of dry fly opportunities as others; It would be fair to say that dry fly Skwala action in February is certainly a lower percentage occurrence than in March, yet it has happened and will most likely happen again. The nymph migration however is always a key factor at this time of year.

This is fishing folks. Things change and not everything is constant. Insects are cyclical, and every day is different. If I were to pick what would usually be the best adult Skwala weeks over the years I would have to say the last 3 weeks of March.  During those three weeks, 5-6 days will be optimal, 10 days will be good, and the rest of the days will be fishing!

The Skwala is a very important hatch in that it is the first Big Mac, Double Quarter Pounder, Super Big and Tasty meal of the season. Regardless of how many adults there are, the fish know they are there. Fish make there living on eating the predominant insects and food sources of the season.

On or about February 15th on the average (every year) the water temps start to increase a bit. Water temps are the impetus for insect emergence and the Skwala nymph gets REAL active  around 39-40 degrees.

Just think about it; It has been a long cold Winter. The trout is pre-spawn at this time of year and therefore the larger trout are thinking about perpetuating the species. Their metabolism is starting to pick up a bit from the previous two months of water temps in the 32-38 degree mark and they will most certainly optimize on food sources as they due year round and also to prepare for the spawn.  The Big Mac is certainly a good food choice at this time of year for the native trout but is not the only bug prevalent. In fact over the years, especially lower water years the Midges of the Late Fall, Winter and early to late Spring can be a major food source.  The Blue Winged Olive, March Brown and Ameletus are also very important food sources at this time of year.

So to set the record straight, to tell it how it is, to hopefully enlighten those of you interested, the Skwala hatch is the real deal! It is not a prolific hatch yet it is an important food source that helps kick off every year here on the Yakima, as well  the Bitterroot, Clark Fork and other western rivers.