The river has remained in good to great condition, however it appears based on the prediction of the NW RIVERS site that the river will be out of shape for a few days this week. ( See prediction graph below) 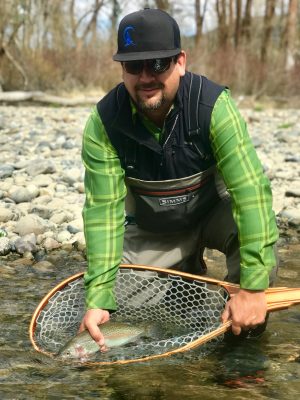 The fishing has been good.

In typical fashion, for this time of year,  this is the projection for the next few days… 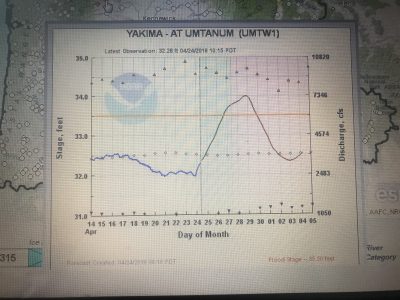 The lake is now starting to fill and in essence “back fill” the lower river.  Fishing overall this spring has been average to good — typical.  All rivers in the west / northwest will have plenty of cold clean water this year.

The swing game has slowed down and the nymphing has become a mainstay…..

We have some dates available on the UC….

We are close to Smallmouth Bass activity on our favorite desert drift stream….. 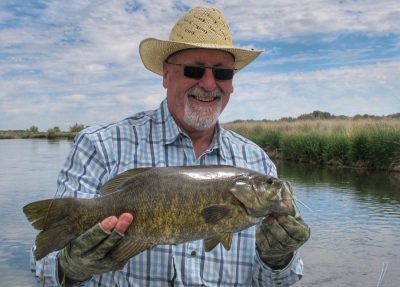 Recently we have caught some great trout and even a big Walleye out of the little river….. The Smallmouth are coming sooooon!  If you are up for some Topwater action, give us a call! 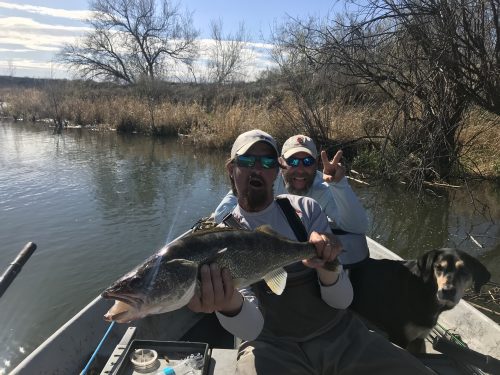 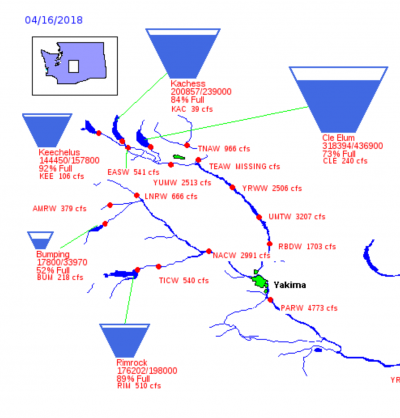 For many years they have been trying to figure out more storage for water in our basin.  We really haven’t started melting in the higher elevations and our basins are almost full.  They will need to release a lot of water soon.

Coming soon to the Yakima …. Caddis and Salmon Fly’s 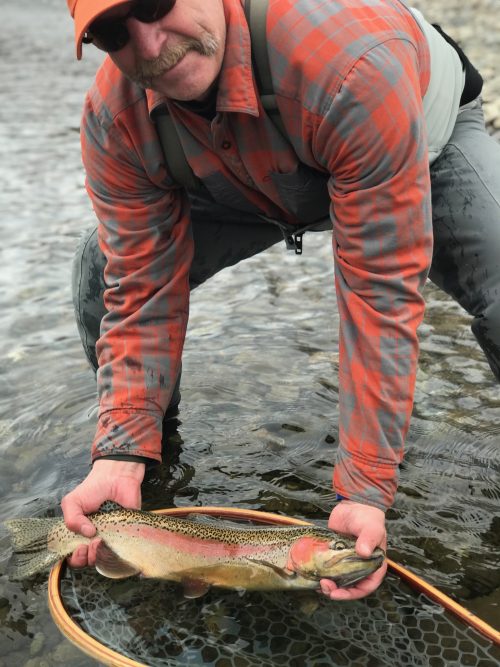 Reasonable fishing recently on the Upper Columbia. Below is a great Father / Daughter photo with a nice trout.

Predominant techniques include nymphing and swinging…No dry fly fishing yet.  Probably won’t see that for awhile.   There are some Midges and Blue Wings. 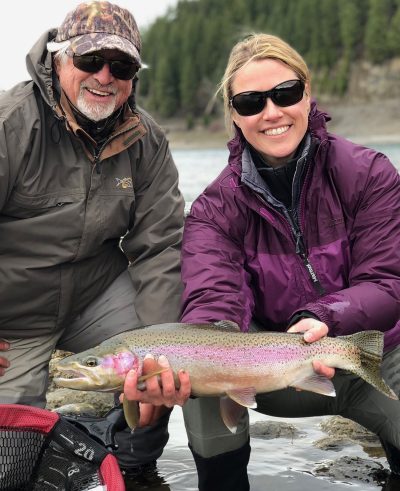 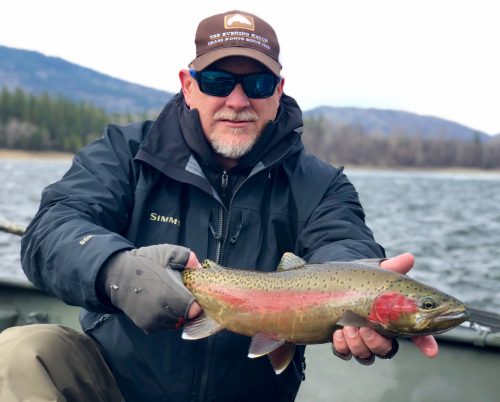 UPPER COLUMBIA
The river is in GREAT condition.  Not much for bugs currently but certainly some good swinging.  Stable weather patterns make for better fishing on the UC.  The lake level is low and the flows at the border are average.

A variety of lines and tips to match the depth and flow should be part of the arsenal.   Sculpin’s to Catch All’s have been on the menu.

Should be a great year on the UC

YAKIMA RIVER REPORT
Northwest river forecast shows the Yakima on a downward trend.  Bugs are intermittent and sporadic however being in the right place at the right time can be worthy.   For the March Browns make sure to be in a riffle location at about 1 pm and hangout with a cup of coffee and wait:)

March Browns are Clinger Mayflies that emerge quickly in riffles.  A variety of patterns can be effective.  One of my favorites over the years is shown below.  The pattern is designed as a dry fly but can also be swung as a wet fly if needed. 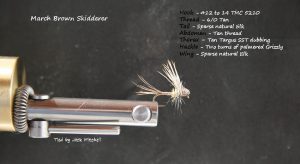 Here is a little story about a March Brown Afternoon

Blue Wing Olives can show up at the same time as the March Brown and also afterwords.  The March Browns will come and go quickly,  The Blue Wing can sputter throughout the afternoon

Currently the predominant bug is the March Brown…
This hatch can be short lived but can also be intense and fun while it lasts.  There are a few Skwala Stoneflies still around 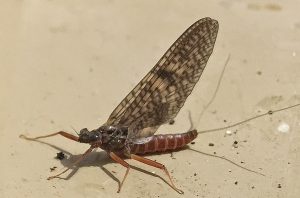 Current Yakima River Flow  prediction  for the next week. 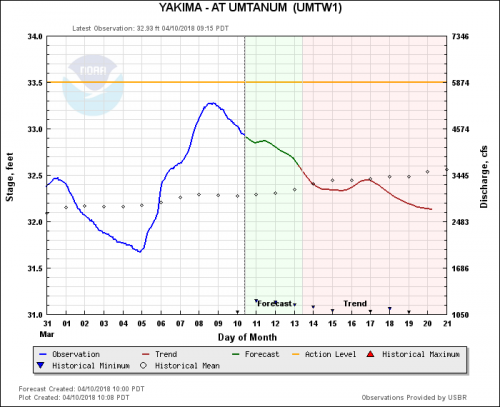 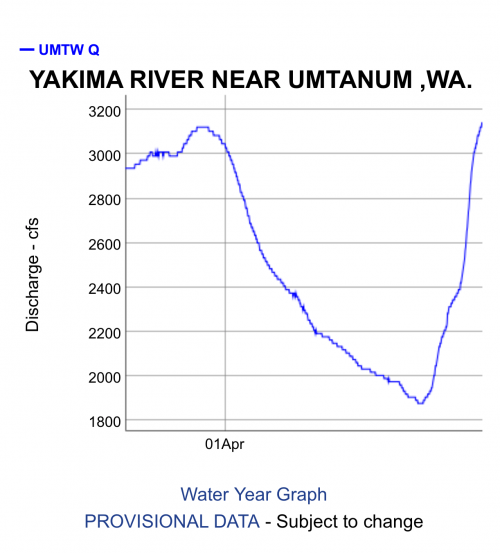 Current screenshot of the Yakima flows….northwest river predictions show the river heading to 7K, reportedly to flush the salmon smolts.  All three of reservoirs are at around 85% full.  Although we have minimal low lying snow,  once the reservoirs  are full they have to release.   The good thing is the water is clean coming from the reservoirs.

The fishing was ‘off the chart’ on the 4th….But since they have elevated the flows the bugs have been intermittent.  Water temps have dropped due to the cold water releases.

We should have lots of cold clean water for our summer this year:) In between now and stabilization (somewhere around June 15)  We will have some great fishing and some tough fishing:)

1)Hatches are between 1-3PM
2)Fish are on the spawn otherwise.

NORTHWEST RIVER FORECAST predicts the river heading to 7000 CFS by the 5th…. That will certainly put a damper on things. 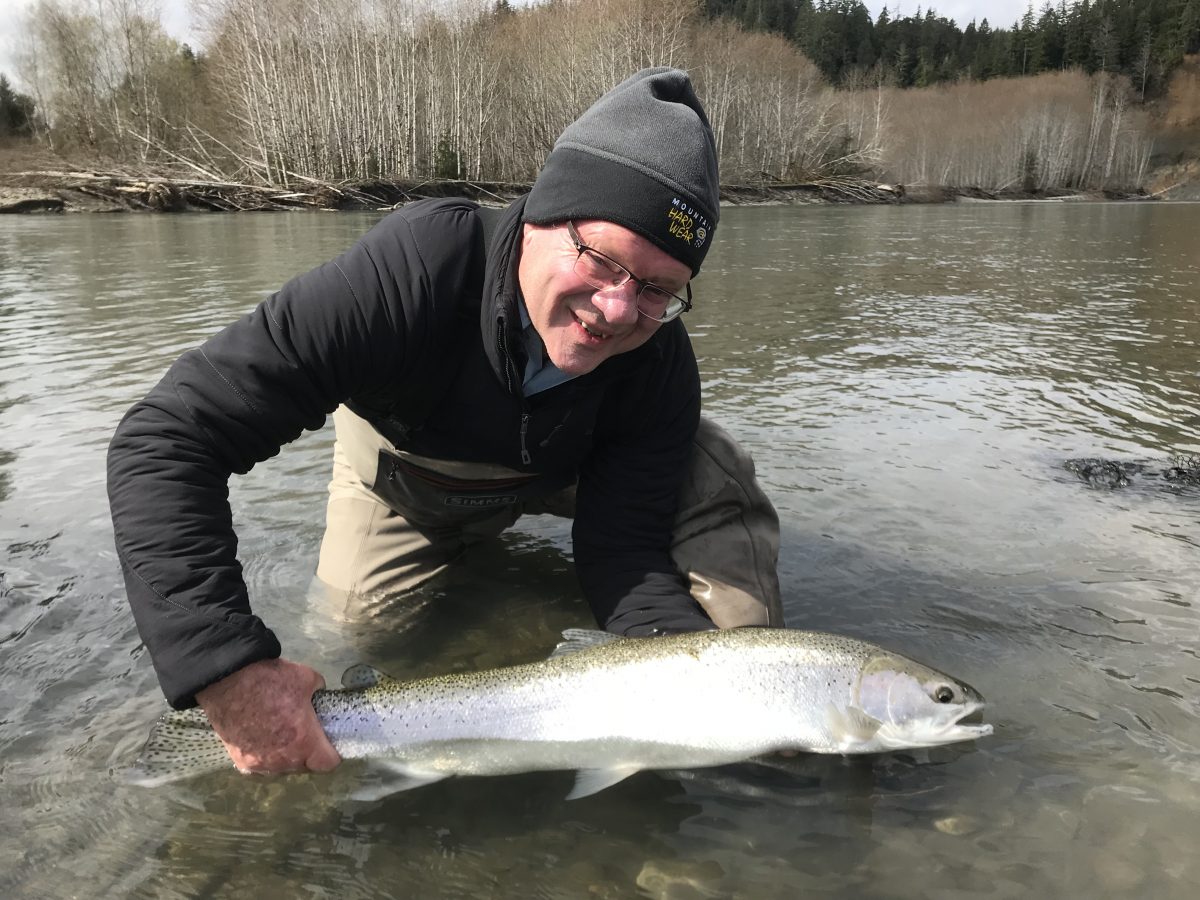 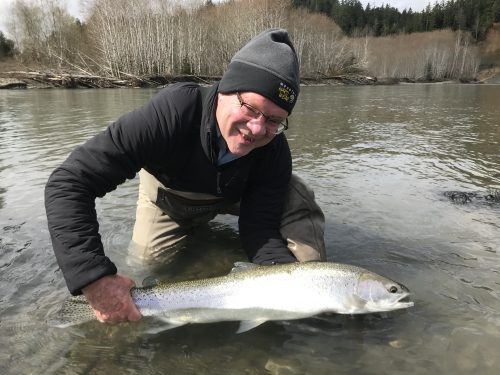 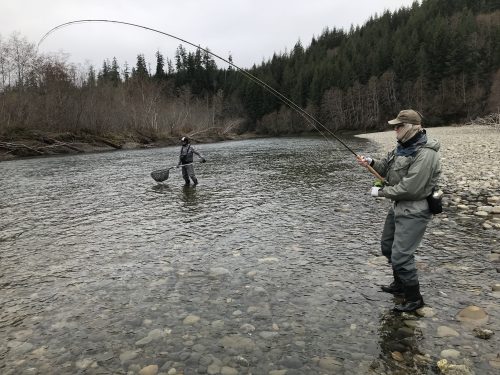 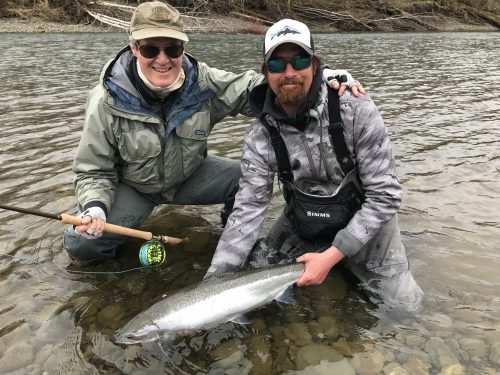 Recently we received a much needed insurgence of water. We were able to spend a few days on one of our South OP watersheds that previously had been to low and is now closed.  Although senior guide, Russ, got to guide a few of our guests into some bright ones before it closed:))

The Blue and Green Artificial Intelligence  behind 10 feet of T-11 was the ticket on this fish for Gene pictured above.

The same held true for Bob, below. 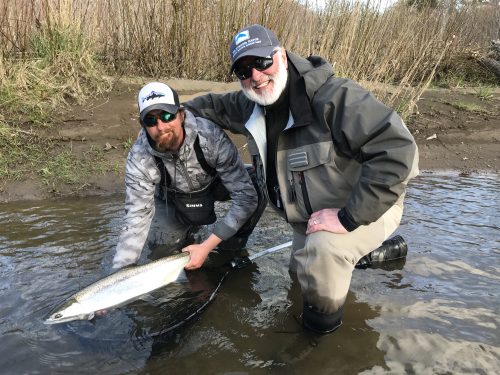 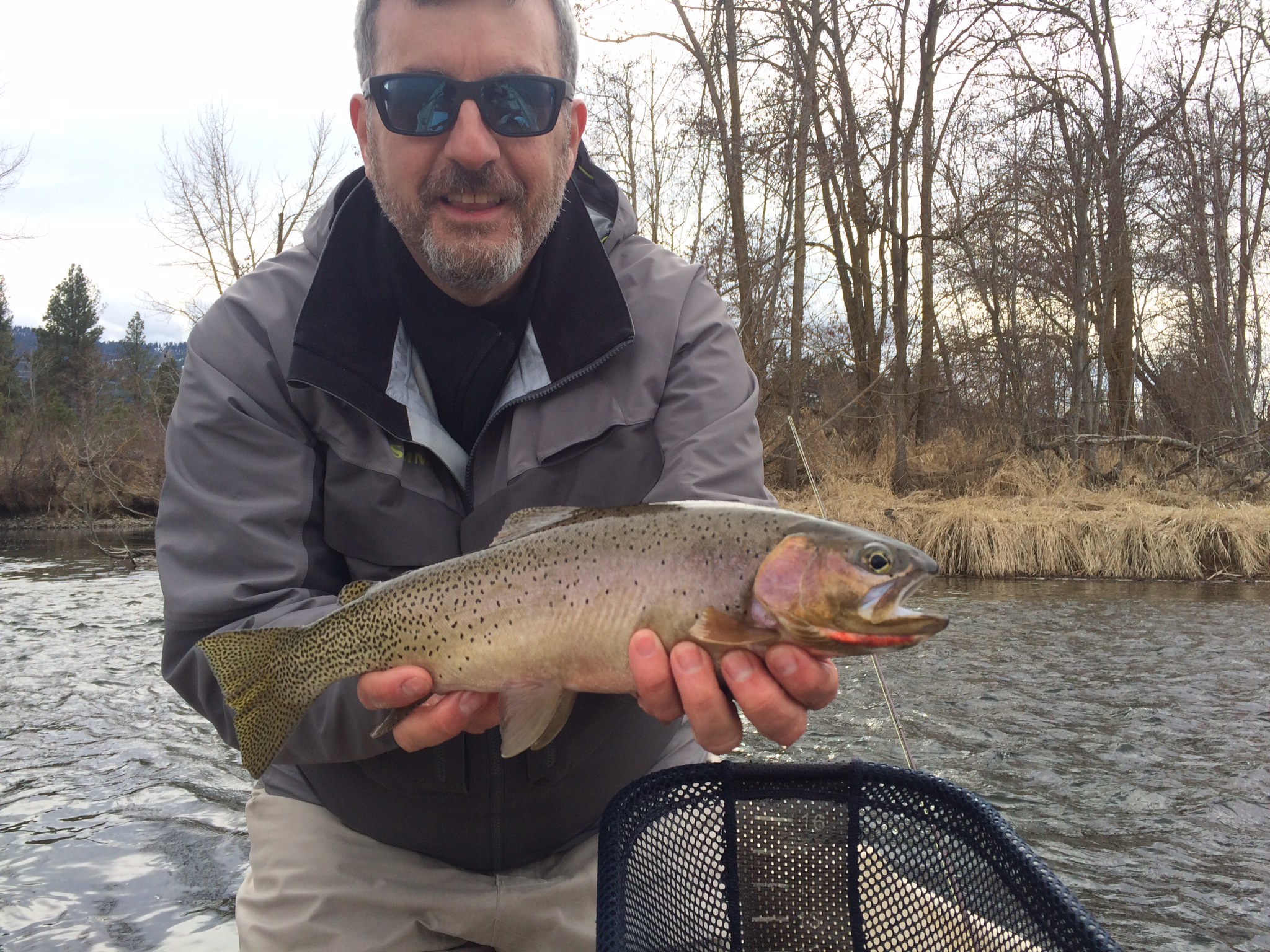 The Yakima has been  a bit tricky lately with nothing ‘a given’  Overall water levels for this time of year are big but mostly due to releases from the reservoirs which will be very full this season due to the  snow pack at higher elevations.